I mentioned a couple of posts back that I would be making more beer and food posts. Well, here is the first of hopefully many food posts over the coming months.

The first of these was taken some months back when we prepared a good old fashioned meal consisting of roast potatoes fried onions, veg and gravy. 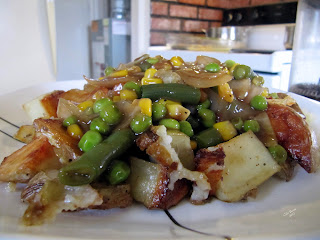 Ok...it may not be the most low calorie dinner but it is pretty healthy compared to a lot of food out there today and it tastes fantastic!

The next one is of one of the most delicious roast pork meals I've ever had. We marinated the pork in apple cinder vinegar and covered it with red onions for cooking. 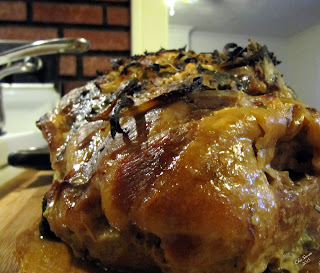 I can't even describe the taste, it would almost melt in your mouth and just fell off the bone.

Next was a another pretty simple but nice meal consisting of veg and German sausage roasted in the oven, very tasty and the sausage just made the meal.

I love roasted sausage, it can really turn a basic meal into a meal that just screams "MOOOORRREEEE...I need more!!!".

Everyone has a memory of food that makes them slowly fall back in a chair and just dream of eating it again, well this next one is mine. 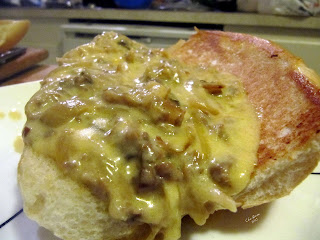 Shaved roast beef, dragon cheese sauce with fresh cheese, caramelized onions and lets not forget the mushrooms. All poured over a fresh bread roll...it was divine, one of my top five meals of all time, simple and delicious.

The final one for now is of a BBQ we had just this week, a couple of days ago in fact. We've decided to do a lot more BBQ this summer provided the weather holds up. We have an old gas BBQ that we've converted to a charcoal BBQ, makes for some very tasty food, it's worth doing if you have an old one lying around. 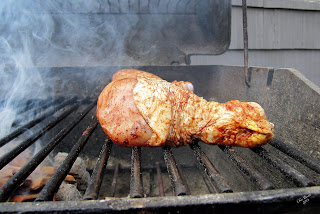 Chicken marinated and cooked well on the BBQ with wet hickory added for that extra smoky flavour. These tasted great and I'm looking forward to some BBQ steak and pork over the summer months. I'll also be posting more about our cooking and beer brewing adventures over the coming months. Speaking of which, we have a nice Stout ageing in bottles right now with about two weeks left before we open the first bottle, I'm looking forward to it. Until next time, get your cameras out and start cooking, brewing and having fun!