In Memory Of James (Jim) Donovan

The following is the speech that was made at my Grandfather's funeral by my uncle John O'Donovan. I am posting it in honor of my Grandfather who passed away on the 27 of July 2002. 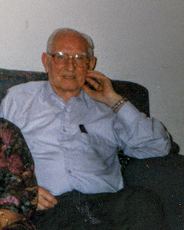 "When we go home,
Tell them of us and say,
For your tomorrow,
We gave our today."

Good morning everybody,
On behalf of my family i would like to thank you all for joining us in mourning Jim's death and celebrating his life. In particular i would like to thank my father's old comrades and friends from the Royal British Legion who lent so much to last night's removal and this morning's ceremonies.
Events and fate shape a man's life and how he deals with life's difficulties and crises defines the man. It is worth for a few moments to reflect on my father's life so the young may realise how fortunate they are and maybe appreciate the sacrifices a previous generation made to ensure the freedom and comfort they enjoy today. It may also rekindle memories of shared experiences for his friends and contemporaries.
Like most O'Donovans my father's family came from West Cork, his grandfather sold a farm and moved to the city where he bought a haulage business which prospered for a good number of years until a weakness for the demon drink brought it to its knees.
My Grandfather moved to Liverpool where my father was born in 1919. He has an older brother, Jack, who lives in Ellesmere Port, Cheshire, whose health did not permit him to travel over for the ceremonies, and a sister, Lucy, who died some years ago.
The family returned to Cork when my father was one. When he was three his mother died, when he was eleven his father died. He and his siblings were separated and sent to live with relatives who didn't really want them and from then on he really had to learn to fend for himself.
Aged 16, he went back to England on his own, probably without any money, to find work. He did and worked at various things until in early 1939, aged 19, he was called up to serve in the British Army. He was enlisted in the 1st Battalion, South Staffordshire Regiment. His first posting was to North Africa in 1940 to confront the Italian Army in Libya and was part of the famous victory when 30,000 British under General Richard O'Connor defeated a much larger Italian force before Rommel arrived on the scene to upset the applecart for a while. His brother also served in North Africa and was in Tobruk during the siege of that city.
From North Africa my father's regiment was sent to Greece, and when the Germans overran the country he was evacuated off a beach in Crete to The Kelly, which was Lord Mountbatten's flagship. He then survived the sinking of The Kelly after it was attacked and sunk by Stuka dive bombers.
From there it was a case of out of the frying pan into the fire. His regiment was sent to the Far East to counter the Japanese threat in late 1943 and he became part of an elite British Force, nicknamed the Chindits, who were dropped behind enemy lines of communication. The forerunners of today's Special Forces, they experienced severe hardship, fending for themselves and living off what they could scavenge for months on end. They were named after the Chinthe, a mythical Burmese beast that was half-lion and half-eagle.
My father was always reluctant to talk about the war but one thing he did say always stuck in my mind. Close to starvation, and living on nerves and wits in the Burma Jungle, he made a promise to himself that if he ever got out alive he would never go hungry again. He kept that promise and come what may he always provided for his wife and family. He cherished his Burma star above all his war medals and was one of only a handful of Irishmen to earn one. He later served in India and Palestine before being demobbed in late 1945.
He worked in Fords in Leamington Spa for three years after the war before returning to Ireland to join the Eagle Printing Company where he saw out his working life until the company closed in 1981.
My father was an outstanding footballer, capable of playing at the highest level had the war not intervened. He played for his Corps on many occasions and had the distinction of playing for the Army against the Royal Air force in Wembley. In these days of pampered and extravagantly paid footballers it is worth noting that he walked into Wembley for that match with his boots wrapped in newspaper.
He had a superb left foot which regrettably skipped my generation but thankfully has been passed onto his grandson Alex and his two great-grandsons Alan and Gavin."